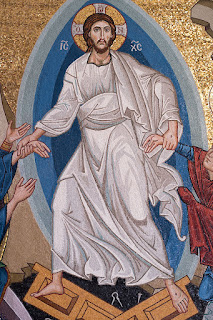 40 pointers to Christ’s Resurrection - 1  Easter’s not just a day but over a month in the Church Calendar recalling how ‘After Christ’s suffering he presented himself alive to his disciples by many convincing proofs, appearing to them during forty days speaking about the kingdom of God’ (Acts 1:3). Over the next 40 days this Instagram blog will present pictures and pointers to what’s most remarkable about the Founder of Christianity and the Christianity he founded.  With Father Alexander Schmemann ‘I would love to tell you that the only meaningful thing in life is what conquers death and not ‘what’ but ‘who’ - Christ’. 40 pointers to Christ’s Resurrection - 2  We have four slightly different accounts affirming that when the disciples went to the tomb of Christ they found his grave clothes folded and no sign of the dead. In the next six weeks the Resurrected Christ was seen according to Paul by over 550 people on 11 different occasions. Christianity spread at an astonishing
Post a Comment
Read more

Canon John Twisleton
I'm a Sussex based priest, ideas and people person, author and broadcaster. My interests include helping people find peace and touch base with mainstream Christian believing. I have published research about the historic Twisleton family and have friends in Guyana, South America where I used to serve as Theological College Principal and am a Canon of the Cathedral.